The Lifestyle blog of a French Girl in Scotland

Beginning of December I decided to go on a wee trip, on my own, just before going back in France for the Holidays. My target was Black Isle and around!

It was just a week after the road trip I made for my birthday and the story happened again, my rental was refused and I had to rent another car to a different company. At that point I thought it was fate, because the same company refused me twice and the same other company saved my trip – again! 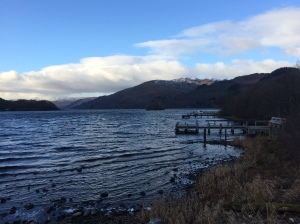 Day 1 wasn’t that exiting, my plan was to go in St Fillans before joining Inverness. We can’t say that St Fillans is exactly on the way to Inverness, it was quite a big detour – wee reference to my guided tour company 😉 – but the point was to see a work of art there, on the loch! Unfortunately for me the sculpture wasn’t there and I did a 3h detour for nothing…I mean in Scotland a detour is never for nothing because I saw some pretty beautiful landscapes. Once I arrived in Inverness – after risking my life in a snow storm around Aviemore – this place is famous for his bad weather, like a microclimate lol – I went to a really cool coffee shop, “Velocity Café” which is also a bicycle workshop, I really like the idea and I think there is the same kind of coffee shop in Edinburgh “Ronde Bicycle Outfitters” in Stockbridge – I need to try this place – anyway, the place was nice as the people and it was a nice shelter from the rain. After this wee break I joined my BnB for the night in Avoch, on the Black Isle. 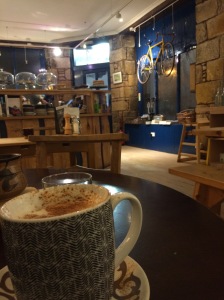 Day 2 started way better than day one! On the advice of my host I went to the Rosemarkie lighthouse, the view, in the morning is really pretty, we can see the Moray coast on the other side of the firth, if you’re lucky enough – which isn’t my case – you can spot dolphins, they are all around Black Isle! For my part I’ll be satisfied just to see seals, I haven’t seen yet! Anyway after that I did a walk from the “Pocket Mountains” guide (the Loch Ness one) that goes to the Rosemarkie waterfalls, it’s a short one but exactly what I wanted, at the end of the walk you arrive at two successive waterfalls, it’s really nice and the path drive you in the undergrowth, following a wee river.

My main goal for the morning was the village of Cromarty. I saw a lot of pictures of this village on the social Medias and it seems picturesque so I decided to give it a look. Don’t get me wrong the village is cute and everything but I have to admit that the oil rig or something just in front of the village ruins a bit the landscape. Again if you’re lucky you can see dolphins. I definitely recommend you to go to Cromarty to try the bakery…oh my god! it was so delicious, I took a cheese scone for 40p and it was the best (and cheapest) scone I had so far in my life, I even went back a second time before leaving to take another one, I also bought some shortbread for my family, again they were delicious. 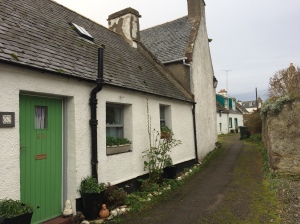 The plan for the afternoon was to go North to visit one distillery, Clynelish Distillery, it’s a bit far so go visit it if you’re around but don’t do like me the road just for that. The tour was nice; I had the last tour of the day – luckily! I would have been really disappointed to drive all those miles for nothing – and on top of that I was alone. It wasn’t my first distillery tour and I already knew the process but it’s always interesting to know the differences between distilleries and as I was alone the tour was more of a chat with the guide than something more official. On my way back I stopped at Dunrobin Castle, in winter time the castle itself is closed but the garden is open. Everything was dusted with snow, it was timeless…unforgettable! That stop wasn’t planned but I think it was one of the best things I did during this trip, I hope one day to have the chance to visit the castle.

The third day was quite busy; I started the day by a walk to the Black Rock Gorge, famous because the set of Harry Potter used this place in the Goblet of Fire. The gorge is actually a canyon formed by a river that eroded the rock; the black walls of the canyon are covered by moss giving the whole a picturesque aspect. After this little walk I decided to do another walk – still in the Pocket Mountains guide – this one have for goal Fyrish Monument on top of the Cnoc Fyrish a 453m high summit, foolishly I didn’t think about the snow but of course in the Highlands in December there is snow! At the end I climbed it anyway because the view seemed worth it, it was! The sky was a bit covered but the snow, the moor and the monument were breathtaking, I didn’t regret soaking my feet and shoes in 10inch of snow!!

After a little detour I ended my day in the battlefield of Culloden, a must for any self-respecting Outlander’s fan, even without this this is a major historical place for the Scottish history and I couldn’t have missed it while I was in the area.

Fourth and last day was unexpected. I spent my last night in Elgin, in the Speyside area, with the plan to visit some distilleries but I forgot that December is not the best time to travel Scotland so they were all closed during the weekend. I had to change my plan at the last minute. So with everything cancelled I didn’t really know what to do, after a quick look on internet I found an abbey just outside Elgin, on the road back to Edinburgh. I decided to go there after a look at Elgin Cathedral.

Pluscarden Abbey is like a time capsule back in the Middle Age, it was founded in 1230, today it’s a Benedictine monastery but it was founded as a Valliscaulian’s one. Pluscarden abbey is “the only medieval British monastery still being used for its original purpose” (according to their website). The location of the abbey is perfect, in the middle of a glen, it’s peaceful and quiet. The little part dedicated to birds feeding was my favourite thing – of course.

Then I decided to slowly go back to Edinburgh, I went through the north of the Cairngorm where the moor dominates, this kind of landscape is not really appealing to me but still pretty to see – my only fear was to have a breakdown with the car, fortunately for me nothing happened! It was a good surprise when I crossed the village of Carrbridge, the place is known for his old packhorse bridge, built in 1717 and this is the oldest stone bridge in the Highlands. Seeing this bridge was the last thing I did during that trip, after that I just joined the A9 towards Edinburgh. 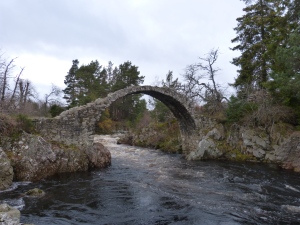 This trip was full of discovery for me; he made me want to discover more about the Highlands and the Moray/Speyside region.